The lesson from FC Barcelona was loud and clear, humility, honesty and respect. The saying goes it takes a village to raise a child, in football, the village is the trainers, the administration, the parents and extended families. In hindsight we are all coaches, we share the responsibility for our kids and we must strive to be the role models that will teach them their core values. As coaches, we must be all that we can be so that our children will continue to make us proud and it is our leadership through actions and words that we must strive to set the example. The foundations we set that consist of our values & principles is what carry our children’s hopes and dreams. Our experience in Barcelona has changed our perceptions of football. Football has the power to change lives, to inspire and provide opportunities for kids to chase their dreams and goals. Football is our village, it is more than just a game. 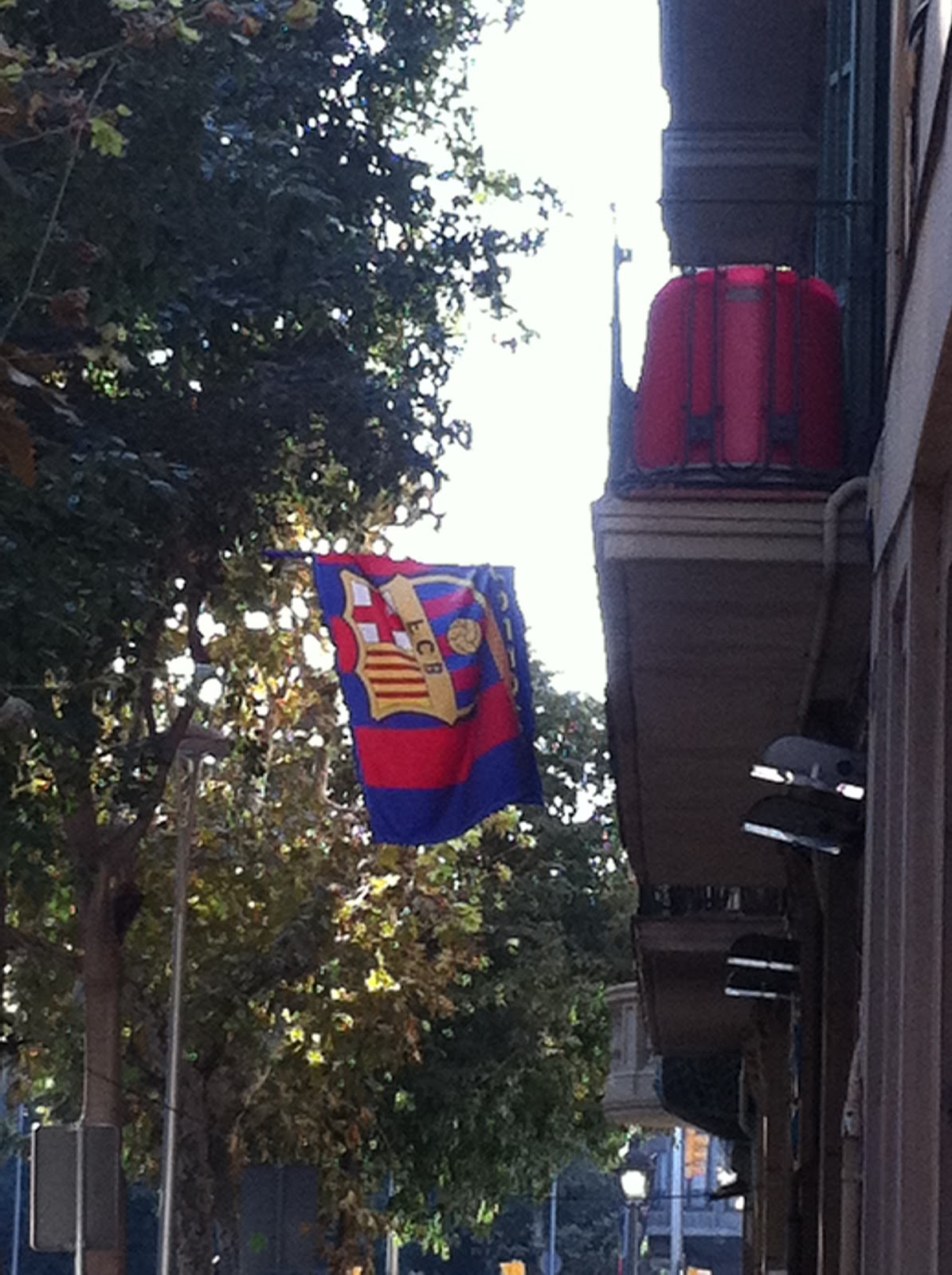 Barcelona is a city inspired by life, by facets of life which encompass all of our senses. Food, art, culture and most importantly football. It is football that drives this town, whilst the city is a vision of joy, a quagmire of calamity, it sparks your senses and embraces art through architecture, food and lifestyle. However, it is football that dominates the landscape & that is dominated by a giant. The giant, however, has a fierce rival. Espanyol, the cities “other team” are bitter rivals, so much so that when our 5-year-old mascot “Marco” stepped off the bus with his beloved Barca shirt on, during our first day at the Ciudad Esportiva now named after “Dani Jarque”, Espanyol’s young footballer that died from a heart attack. We were told to quickly put on a different shirt as the press were around and the club would not take this well, such is the fierce rivalry between the two clubs, where two elderly men watched three of my lads walk by with Barca shirts and Espanyol bags, to laugh and ridicule them for such nonsense.

For our kids, it was an experience which I believe they will not soon forget. For us the coaches it was a pure lesson in all facets of what makes Spain what it is today. The first and most important factor is that pure and simply the sport is number one and it dominates everything. I wanted the kids to experience a country where you didn’t have to look eight pages in from the back of a newspaper to read two lines about our game. I could never have imagined how ingrained the game is in Spain. Five daily newspapers dedicated to football. These are football newspapers not “news newspapers”! Football is on TV, twenty-four hours a day with games from leagues all over the world. Everyday football was on in our hotel lobby TV, football is without a doubt a large part of the Spanish culture. 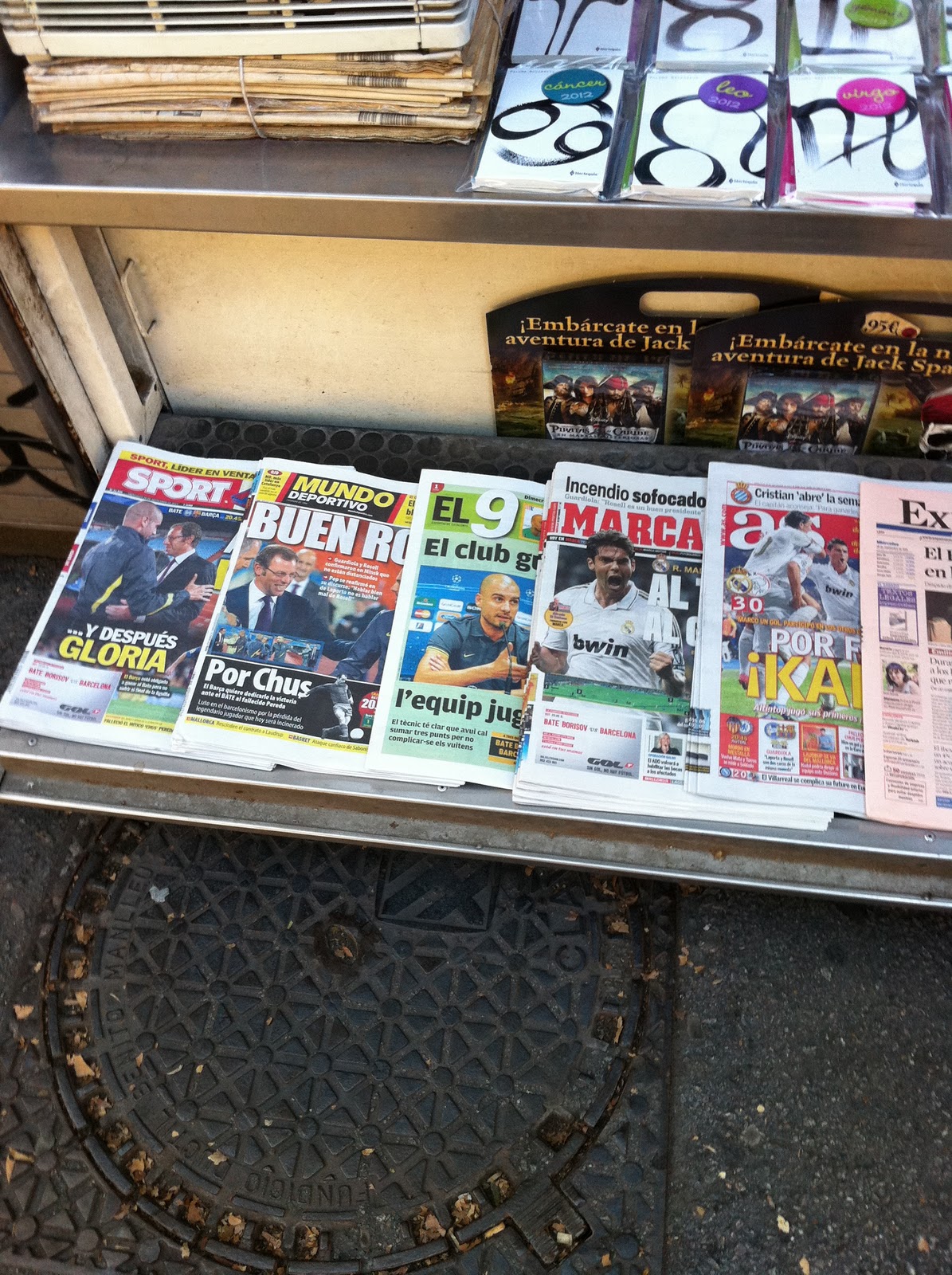 As we disembarked our flight, the first signs of the game were apparent, 20 meters from the plane exit. A poster with Messi, we all stopped to take photos a ritual that will be repeated a thousand times over. We clear customs and the first shop we see is FC Botega an FC Barcelona official merchandise store. By now we were all excited but feeling tired. We settle into our accommodation and head off for a bite to eat, we walk no more than 20 meters and we can already see Barcelona flags hanging from balconies. That night our host Jorge conveniently takes us to an Italian restaurant. The guy cooking pizzas has his eyes glued to a small TV next to the pizza oven, the game is about to start. As it turns out our restaurateur’s hail from Napoli. Within 10-15 minutes the restaurant fills and I can see men and women glued to the game on TV. It then occurs to me that it’s Napoli playing. Halfway through dinner, the restaurant erupts Napoli scores and our travelling party gets a right old fright. Before you can blink an eye our kids start to join the fun, cheering and chanting. Our first night and we are privileged to experience what happens on game night in a football country, I could not have planned it better myself! Over the next few weeks, our touring party gets to experience life away from Rugby and AFL dominated nation. They are made to eat breath and sleep football, it is everywhere!

It was our first day at RCD Espanyol, Espanyol has a proud history and also plays in La Liga. As we get off the bus we are all in awe of the superb facilities, two full-size grass pitches, one full-size synthetic field, one goalkeeper’s area and one small-sided pitch in the rear. There is a small stadium on the main pitch, coach’s offices, club offices, a club shop and a cafeteria. By this time I was already drooling and feeling envious. For the next two training sessions,” Enrique”, an Espanyol youth development coach put our kids through their paces and we exchanged ideas as we picked his brain trying to get as much information as we could. One interesting point he made was” we don’t do much here the country does all the work”. I think he was trying to point out what we’ve been saying all along and that is that culture dominates a large part of development, not just methodology. He also said that they will never develop the type of player that comes from South America. He said that RCD Espanyol kids compete on par with Barca kids and that RCD also has a good record of developing players through their system, however, comparing our experiences with both clubs, Barca was on a different level. The methodology was different, there still existed the discipline and respect but I found Barca to be more nurturing and the training was based on different principles. 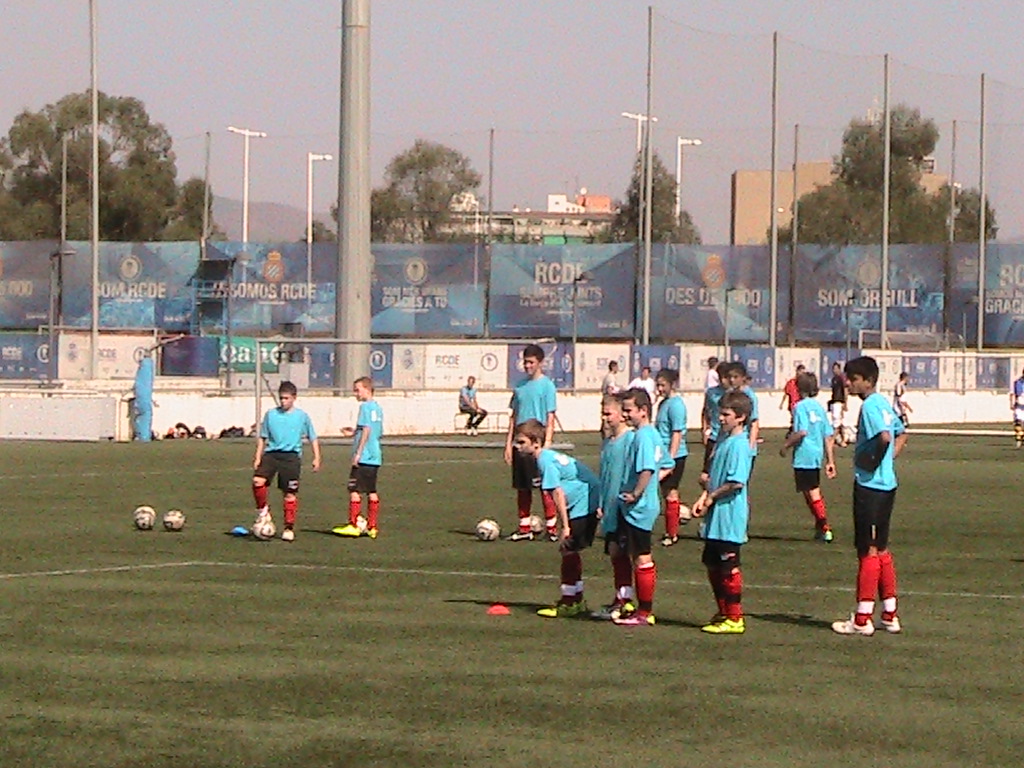 The Espanyol sessions were very intense the trainer demanded that the kids focus and work at 100% intensity. I came to a conclusion that they train kids to be mentally tough and training with intensity is part of that mental development. However their methodology was very similar to ours, many parts of the training consisted of isolated exercises which mean’s that it has to be more than drills that develop players. It is the complete package.

FCB Escola is the grassroots division of Barcelona; La Masia is a separate department. It is where only the most gifted are invited. However, the Escola system delivers players to La Masia when they come of age and I can tell you that they leave no stone unturned. In FCB Escola the methodology also plays a huge part in development because it is all geared toward developing intelligence. Every drill is aimed at developing insight, multi-tasking, positioning and technical aspects. It’s a philosophy that understands that a child’s motivation is enjoyment if the child is having fun and learning they will practise more and harder. It is this system that allowed the likes of Messi, Iniesta and Xavi to thrive. However the most important facet is the fact that they care for the kids, they know that not all of the 300 odd children enrolled will become professionals but they care about them none the less. “The country does the rest” 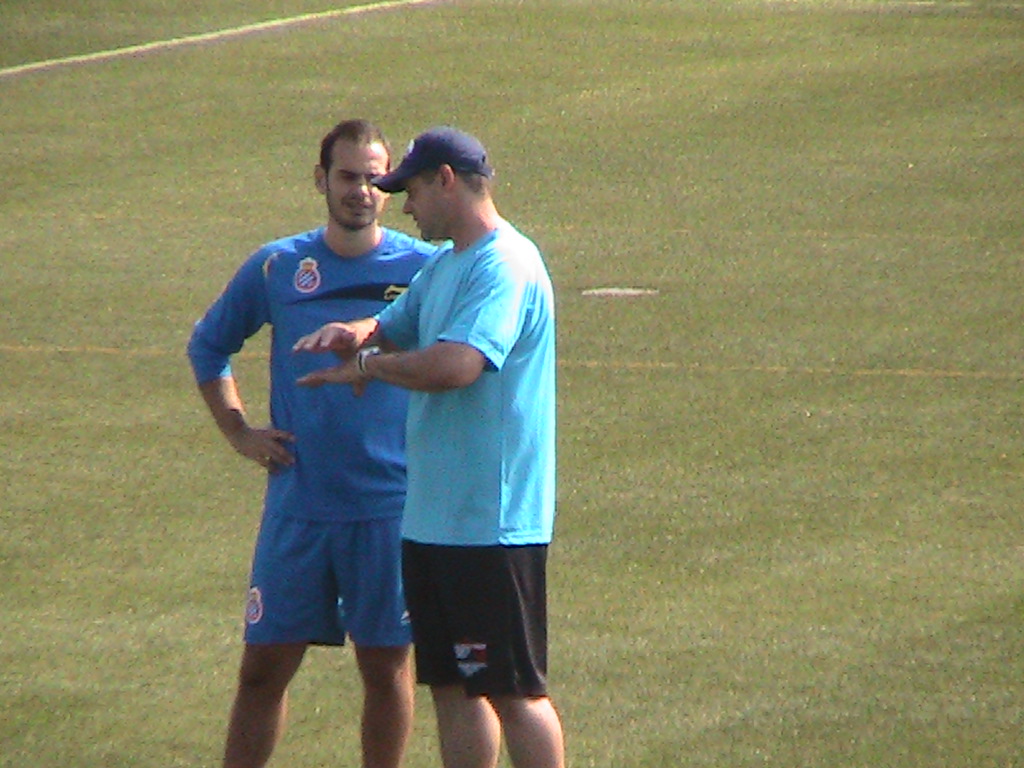 When parents and players arrive at training they are greeted at the gate by their host, once the kid’s leave the parent’s side they are in the total control of the school with no interference what’s so ever from the parent or guardian. The children go to their designated change rooms to prepare, on each door is the name of a first team player, the name represents the teams that the child partakes in. They don’t come dressed in their training gear. They must change and wait to be escorted to the pitch. They are taught from an early age to respect the field of play and their coaches and that a footballer must be equipped with the right attitude and equipment. Training sessions are only 1 hour twice a week with an additional technical session on Fridays, for those wanting more. They do pay fees but they are minimal. It is all geared for quality over quantity. At the end of training, players are required to return to the dressing room with the convenor or coach, they must shower and change back to normal attire. Parents will only see their kids from a distance and when they are allowed to return to the gate for collection. 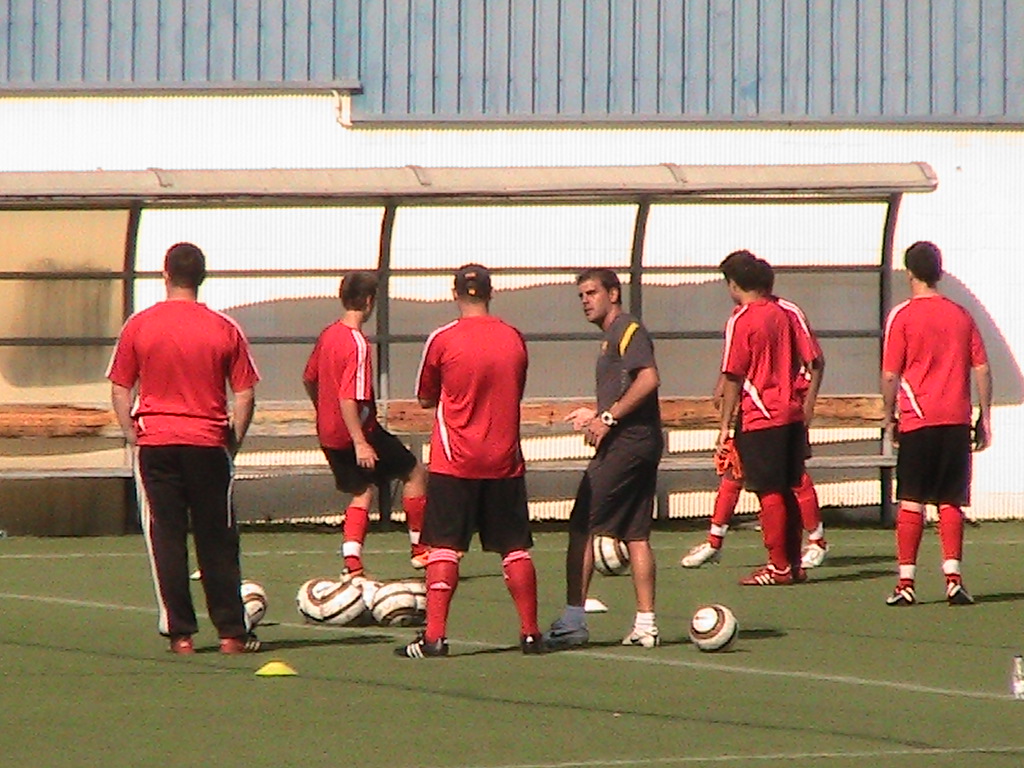 From the first day, the kids are introduced to Barca, they begin to respect and dream of one day playing at the massive stadium just beyond. They are taught to be respectful and through their membership, they grow to love the team, the shirt and what the club represents. They are guided in an environment where everything is geared for excellence, hard work and respect. Everyone works together so that the learning outcomes are of the highest standards and most importantly they control how they play and who they play against. This is why they play in-house, there is no association telling them what age group each child must play and what size field they should be on. The national body allows them to run the programs in the manner they see fit with little or no interference. The end result is advantages to everyone involved. 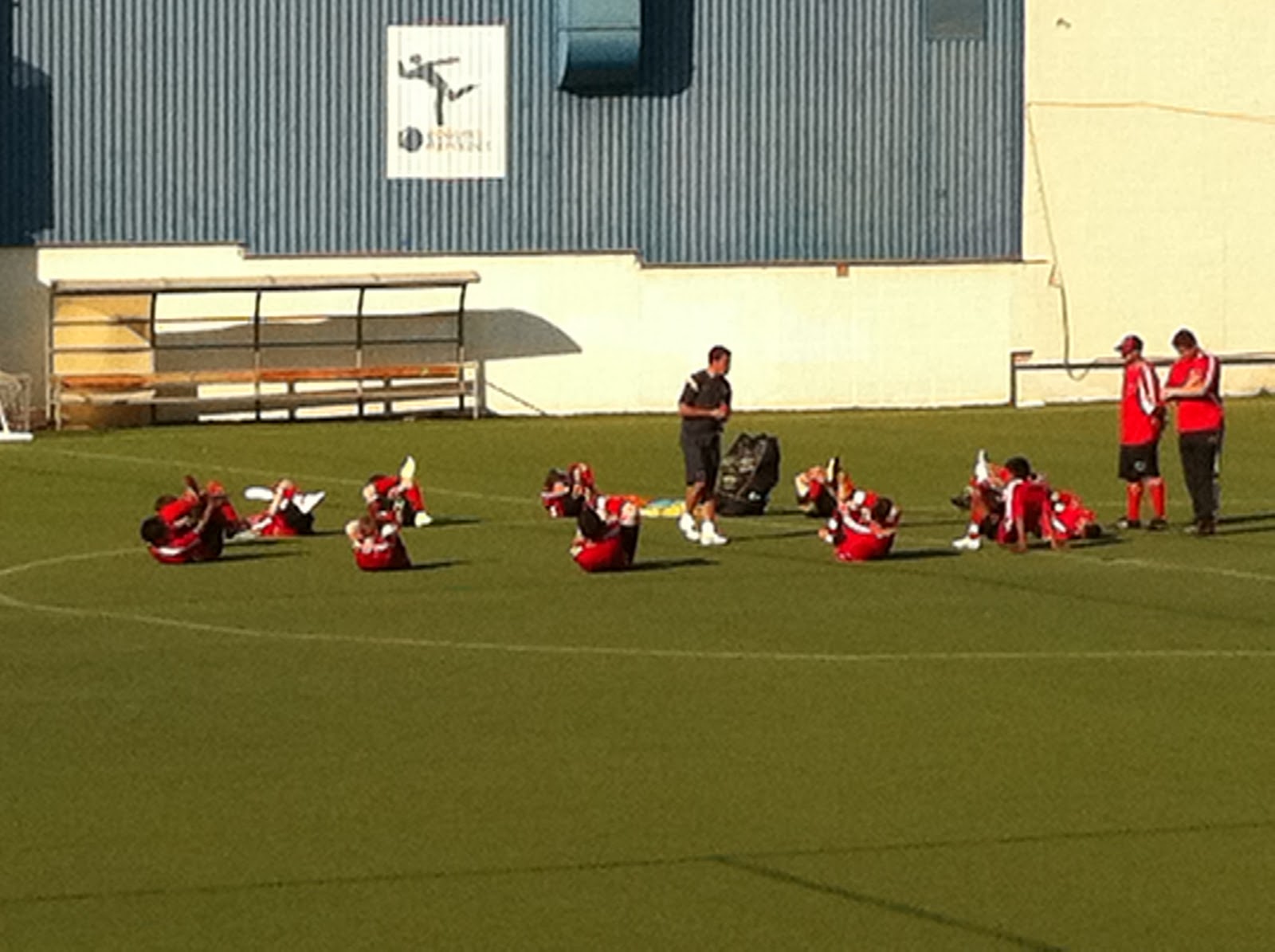 We played friendly games against a local club side and I must say the facilities were fantastic however in comparison to Barcelona’s Escola well let’s just say apples and pears and I’m not talking about facilities. Barcelona is who they are because they are unique. Judging by what I witnessed with this other club the same philosophy is not practised here. In fact, it was very much to Australian standards with kids doing laps without a ball, standing in lines waiting for turns and no respect protocols, players would just walk across the pitch to their training spot and wait for their coaches. It was quite a large contrast to the more professional clubs. 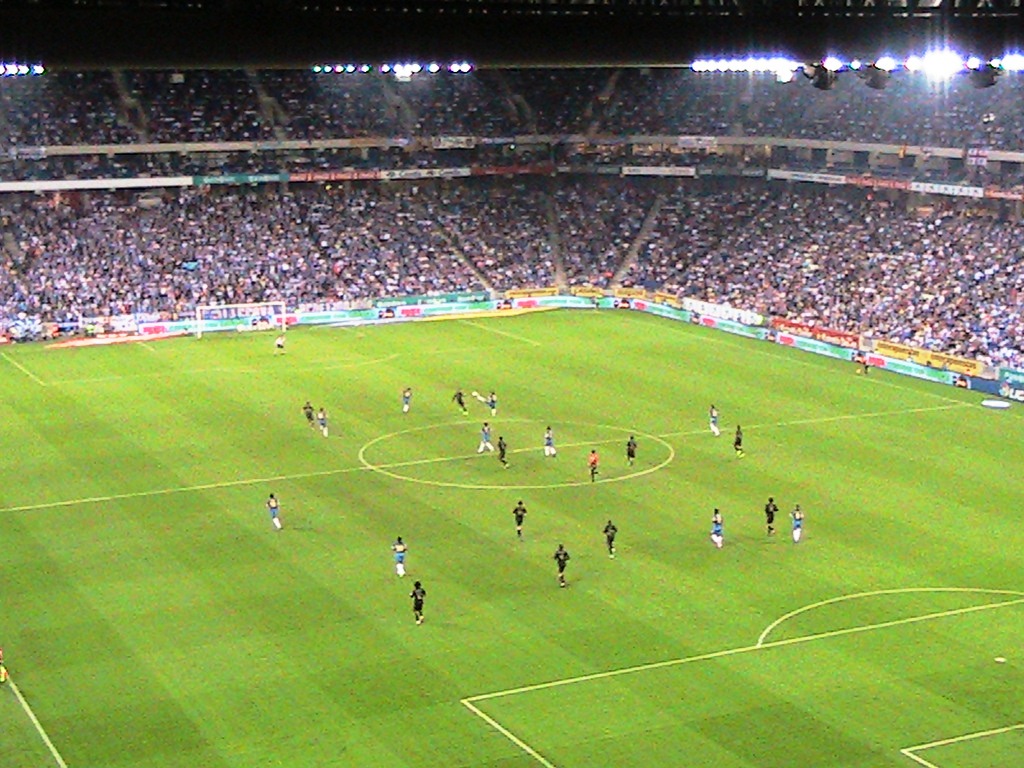 All in all, it was a fantastic adventure we all learned so much about the game and all we can do is to dream that one day in Australia our culture follows the same path, if only we could get it right, the way Barcelona have got it right. I aim to implement many of the lessons we have learned within our school’s program and hope that our kids will come out the other side better for it. We are going back next year and this time we will also visit Barcelona’s main rivals Real Madrid, it will be interesting to see the contrast between the two development systems.

About the Author: Gustavo Cerro

I'm a former professional footballer, part-time blogger, football fanatic, sporting director of Foundation Football. Father of two brilliant musicians, ideas man, inventor, a drone pilot, handy with a lightsaber and lifelong partner to my soul mate. My views and opinions are my own and you're all entitled to them.